Sign up to our Newsletter and find out about our offers first!

Belmore Court’s central location means you can sample the great food and drink that The Fermanagh Lakeland’s has to offer, all within walking distance or a short drive. Families can choose to enjoy a fine dining experience, a lively bistro, speciality restaurant, sample one of the unique cafes and delis, or simply a ‘Take-Away’ to enjoy in the comfort of your room. Casual dining makes kids feel right at home and the The Fermanagh Lakeland’s offers a special occasion for family and kids. Enjoy this hassle free with an abundance of Family Friendly restaurants in the local area.

With top quality locally-sourced ingredients on your doorstep, craft food, country kitchens and bakers- our selection of restaurants make the Lakeland’s a food lovers’ paradise. There are so many family friendly places to eat in Fermanagh, from Little Wing Pizzeria to The Firehouse. See what the restaurant’s in Fermanagh have in store for you and your family’s taste buds! 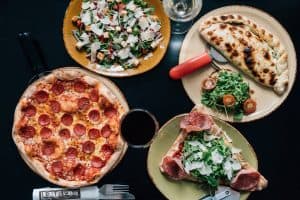 The WV BAR & Restaurant is situated next door to the Belmore Court & Motel and will treat our guests as their own.

When it comes to food and drink, The Westville is one of Enniskillen’s firm favourites with travelling guests and locals alike. Think rustic gastro cuisine inspired by the finest locally sourced ingredients, expertly crafted and delivered with impeccable service, accompanied by huge helpings of the infamous Westville hospitality! The whole family will be sure to enjoy the WV.

Find out more about the WV Bar and Restaurant.

Smack dab in the middle of the busy main street; Little Wing Enniskillen is both the newest restaurant and also our first venture in lovely Fermanagh. The great thing about littlewingpizzeria is that it is open a little later than most Fermanagh Restaurants offering a very family friendly atmosphere. We recommend the massive 24 inch pizzas, which are great for the whole family to share.

Find out more about Little Wing

The Firehouse Bar & Grill is one known by the locals and visitors to be one of Enniskillen’s best eateries in the town. Boasting a menu full of flavours and great choice for the whole family; stone baked pizza, grilled steaks, burgers and more! The Firehouse is perfect for families, large groups, or a get together with friends or a family. Recently Awarded “Best Casual Dining Restaurant of the year, Fermanagh”.

Find out more about The Firehouse

Fermanagh’s newest ‘Gastro-Pub’. With a passion for top-quality, down-to-earth, great value food and a commitment to everything local, The Taphouse offers a warm and inviting family-friendly dining experience. Situated in the leafy suburbs of Enniskillen, they offer uniquely offer ample on-site parking and a cosy yet sophisticated atmosphere suitable for  any occasion.

Find out more about The Taphouse

The Crowes Nest is located on the high street and one of the oldest bars in Enniskillen town. Renowned for their hearty pub grub, great music and entertainment, the Crowes is the perfect place for an evening out with the family. A Traditional pub serving great tasting food from locally sourced produce.

Find out more about the Crowes Nest

Whenever you decide to eat in Fermanagh- you will not be disappointed! For more information on other restaurants offering a variety of dining options please visit https://www.motel.co.uk/restaurants/ 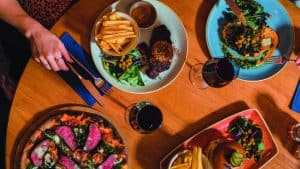 Belmore Court & Motel was the first Motel in Ireland and was the brainchild of Raymond McCartney who previously owned the Killyhevlin Hotel, Enniskillen and Lough Erne Hotel in Kesh. After travelling extensively with his family in America he saw the benefit of an accommodation base central to bars, restaurants and attractions. In 1989 he purchased the row of houses known as Wickham Drive and started converting them into self-contained Motel bedrooms.

A “Hotel,” according to Merriam-Webster, originated in the year 1765 and comes from a French word for an establishment that provides lodging, meals and other services. “Motel” came along much later, in 1925, according to Merriam-Webster. It blends the words “motor” and “hotel” and is meant to describe an establishment that provides some, but not necessarily all of the services associated with a hotel.

A Motel is more of a limited-service Hotel and doesn’t have a bar or restaurant although most have a breakfast room. Many of the rooms are located on the ground floor and be accessed easily from parking outside the room. Motels employ a comparatively small number of employees, typically receptionists and housekeepers. We are registered as four-star Guest Accommodation with Tourism Northern Ireland and The AA.

Here are a few facts about motels:

When should I book a motel instead of a hotel?

There are a number of situations where it makes more sense to select a motel instead of a hotel, such as:

Our central location in the heart of The Fermanagh Lakelands is the perfect base to discover the many things to do and see nearby. Known as Northern Ireland’s Lake District, with an amazing abundance of lakes, waterways and a vast haven of natural spaces, where the slow pace of life seems to make quality time last longer.

Our Standard Self-Contained Rooms in Enniskillen are located in the 1950’s motel terrace adjacent to the reception block that has been tastefully converted into quality one and two-bedroom units.

Quaint and stylish, the Motel offers guests something a little different but of course, with the use of the facilities of the Belmore Court, Enniskillen. Truly a unique place to stay!

The Motel has several ground floor rooms and a number of Pet-Friendly rooms – please request these in advance.

Book your stay now at https://www.motel.co.uk

The enchanting Lakelands of Fermanagh allow exploration for all ages. A network of paths, trails & tracks consist of  lush, green woodland, panoramic Lough Erne views, striking waterfalls & delightful country parks. If you are the type of family that loves to explore new territories or a keen walker looking for your next adrenaline pumped hike then Fermanagh is the perfect getaway for you.

Carrickreagh Viewpoint Walk  cuilcaghlakelands.org/geosite/ely-lodge-forest/ is part of the Cuilcagh Lakelands Geopark, it can be accessed by both water and land as the forest is located on Lower Lough Erne. A popular fishing spot from anglers all over the world. The forest contains a fine mixture of broadleaved and coniferous trees but of particular note are the mature European larches that thrive here. Follow the path as it meanders along the shoreline with views to savour. The Carrickreagh Jetty Walk (2km) here is a pleasant, easy trail with an accessible path. Suitable for both families & beginner walkers.

Keep an eye out for red squirrels that are active in the forest!

Castle Coole www.nationaltrust.org.uk/castle-coole is one of Northern Ireland’s finest Neo-classical houses, allowing visitors to glimpse what life was like in the home of the Earls of Belmore. Designed by James Wyatt, Wyatt adhered closely to the Neo-classical ideal of restraint, symmetry and proportions, with architectural features carefully scaled.

The surrounding wooded landscape park sloping down to Lough Coole is ideal for long walks and for dog walkers. Take a trip below the house to experience the unusual servant’s tunnel whilst on a guided or self-guided tour.

An ideal day out for the whole family!

Cuilcagh Boardwalk Trail www.theboardwalk.ie meanders through one of the largest expanses of blanket bog in Northern Ireland. A really quite extraordinary to visitors: a linear walking route, a little over 12km, that takes you from the car park right to the mountain’s well known flat summit, via a stepped wooden boardwalk. A steep climb is required to reach the viewing platform which provides breath taking views of the surrounding low lands. With views of limestone landscape, abandoned Irish cottages, dry stone walls and potato cultivation ridges, Ireland’s past heritage is sure to take your breath away.

The views are breathtaking whichever direction you walk and when you reach the top, you’ll be gifted with the sight of Lough Atona, a glacial lake nestled at the foot of the mountain as well as Lough McNean.

A demanding walk recommended for intermediate walkers- if you are up for the challenge. The walk starts with a steep limestone 700ft climb made up of around 370 steps and runs around Lough Navar for 9km. Fermanagh offers constant surprises From gentle lakes to dramatic views. Ensure proper footwear is worn & if you are lucky enough to reach the top on a clear day you will see views stretch for miles, from over the islands in Lough Erne, to the Blue Stack Mountains of County Donegal.

Lough Navar Forest is a magnificent site within the Geopark. This particular walk takes you along forest tracks, deep into the forest through delicate woodland plants such as wood sorrel, wild garlic, and bluebells, contouring around beautiful river banks.

The path will allow you to pass ‘boulder field’ – an area of huge sandstone boulders left behind as the ice sheets melted at the end of the last Ice Age over 13,000 years ago. At the top you will witness the beauty of Blackslee Waterfall, flowing down a 20m cliff before continuing its journey down an undercut rocky gorge. The path then continues into Lower Lough Erne.

A Moderate trail with a distance of around 4 miles.

www.castlearchdale.com A country park packed with many walking routes that pass ponds, a wildflower meadow, butterfly garden and a deer park enclosure.  The Woodside Riverland Walk follows a circular route through thickets of woodland and commercial forest. If you are lucky you may spot a kingfisher skimming over the waters in its search for food.

Offering something a little different to other scenic parks – This vast natural playground was the most westerly flying boat base in the Second World War, and was the main base from which these aircraft flew. Be sure to check out the Castle Archdale at War exhibition.

www.nationaltrust.org.uk/florence-court A brilliant, scenic trail through the Florence Court that makes for an excellent walk to do with the whole family and is perfect for walking, running and cycling. A well signposted and maintained walk with scenic views of green woodlands and lush rivers.

Ensure proper footwear is worn. Takes an average of 2 h 20 min to complete.

This walk is located in the Boho-Belmore Mountain area, right in the heart of Fermanagh’s cave country. Beneath your feet lies an extensive maze of caves which attract cavers and potholers from far and wide to west Fermanagh. The cave is fed by a waterfall and swells to a torrent during harsh weather. The exterior of Pollnagollum Cave was used to film Beric Dondarrion’s hideout in Season

What are the different types of hiking trails in Enniskillen?

What is the longest trail in Enniskillen?

According to AllTrails.com, the longest trail in Enniskillen is Kingfisher Cycle Trail – Northern Loop. This trail is estimated to be 157.7 km long and takes on average 41 h 33 min to hike.

Can you walk around Lough Erne?

Around the shores of both Upper and Lower Lo ugh Erne you’ll find a wealth of stunning walking routes, from short and pleasant strolls to longer, more challenging hikes. And while fragrant forests are plentiful here, Lough Erne has a few surprises up its sleeve too.

How long is Cuilcagh mountain walk?

How long does the walk take? The Cuilcagh Boardwalk is approximately 11km and takes on average 2-3 hours to walk. From the car park to the start of the boardwalk, the trail is 4.5km with the boardwalk including the final ascent via a steep section of wooden steps being 1.5km in length.

Why Book With Us?

Book Your Stay
Why Book With Us?